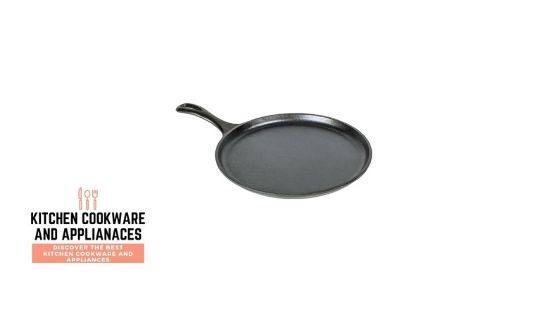 What a funny name for such a useful tool, griddle. I have a 10.5 inch Lodge cast iron griddle and it works efficiently. When I first got mine I thought what a nice tool for omelets and scrambled eggs. Having used this tool often in my daily life I quickly realized like all cast iron cookware it is much more useful than I originally thought.

Instead of just breakfast items griddle pans can be used for making delectable lunches, dinners and even some desserts. The ability to fry is the main attraction here no need to bake or sauté.

Some wonder who need a cast iron griddle and why? To be honest nobody needs a cast iron griddle it is an item you have to want in order to see the utilitarian value. Why anybody would want one is simple, the desire to cook food with a tool you can rely on.

I understand full well in today’s ever-changing world how less common it is to cook from home, on a grill or campfire. Instead, most prefer to eat out for the sake of convenience. Yet that is not say cooking from home is dead or a thing of the past there are and will always be people who enjoy cooking awesome meals at home.

In this review we take a look at the Lodge cast iron griddle. First we begin with what kind of person would see the benefits of this pan. Then we discuss the features that make cast iron so reliable. Finally, we go over the ease of use as a tool.

What Kind of Person Would see the Benefits

Someone with the desire to cook food sounds like any average cook right so those people would see the benefits correct? Not necessarily individual preference does play a role in deciding what material you prefer to cook with. Some people prefer stainless steel, some enjoy the wonders of granite rock, many others like me prefer cast iron, while others stay complicit using Teflon.

Only people who prefer to use cast iron or like to change in between other cookware material would see the benefits of this pan. Cast iron believe it or not is not enjoyed by every cook at home. This is mainly due to the maintenance required for a cast iron griddle. The maintenance itself is not as labor intensive or time-consuming as many critics point out.

Prior to purchasing a set myself I was given the same exact impression cast iron cookware is way too demanding. Upon doing more research I found some information useful that dispelled this belief. Just like individual preference plays a role in the cookware you choose it also plays a role in how you want to maintain and store your cooking tools.

The maintenance process can be strict or lenient depending on how much you care about the aesthetics of your cast iron cookware. Some people are very protective of their cast iron cookware while others exercise the robustness of the material. It’s all up to the person using them that’s what critics forget.

What Makes Cast Iron so Reliable

Cast iron has simple but very effective features that make it astoundingly reliable. Cast iron tools today are certainly a thing of the past but cast iron cookware stay dishing out amazing meals.

Many features of cast iron cookware come from the material it is made out. Cast iron can handle extreme temperatures allowing it to be used on any cooking surface this includes grills, campfires and ovens. Any cast iron that is not enameled has a layer of seasoning baked onto it in order to give the cookware piece a non-stick property.

Leaving cast iron unseasoned can cause oxidation. The wonderful part of cast iron is oxidation never renders the tool useless depending on the severity of the rust. Normally a quick cleaning secession is enough to get rid of any rust. If you are unsure or interested about how to use cast iron cookware check out our guide here.

Simple features albeit very useful for cooking. As a cooking material cast iron is able to last generations if maintained properly.

The Ease of use as a Tool

Most of the time I use my lodge cast iron griddle rarely do I think of it as a tool but it is. I already explained how the maintenance process can vary from person to person which is what makes cast iron so easy to use.

Some people prefer to go above and beyond to make their cast iron look impeccable while others prefer to rely on the durability of the material and rarely care about seasoning. Really the only item that changes is not in the difficulty maintaining it’s the time it takes to maintain. It can range from as little as a couple of minutes to at maximum an hour.

I do not have to season often but that is because I follow my own maintenance regiment. I rarely see bare gray cast iron spots or rust because of how I care for my cookware. Seasoning is not done on a weekly or monthly basis either. This is made possible by sticking to the basics of what we know about cast iron and the temperatures it reaches while cooking. I can not stress enough about how easy it is to use these tools.

I was almost deterred from purchasing cast iron cookware because I was getting information from strict individuals who worry about aesthetics. The impression they gave me was that cast iron is way too difficult to deal with but in reality it’s not, as long basic good kitchen practices are followed.

Product Description: A 10.5 inch round pan that comes already seasoned, manufactured by Lodge. The slightly raised edges are for neatly containing cooking oil or batter. The pan itself is somewhat heavier than other cookware so keep this in mind for those with arthritis. Care and use is easy and can be accustomed towards individual preference.